Posted on July 7, 2016 by anotetohuguette

“ You don’t have to say everything to be a light. Sometimes a fire built on a hill will bring interested people to your campfire.” – Shannon L. Alder

The first fireworks of the season have started already (for July 1st – Canada Day) and while standing in front of the open sliding glass doors to the balcony on that July 1st night, I was able to catch some spectacular glimpses from the simultaneous displays of both West Vancouver across the water and Coal Harbour here in downtown. The fireworks that I could see as my eyes traveled back and forth between the two shows were beautiful, the West Vancouver display with the dark forest of Stanley Park in the foreground was otherworldly and the Coal Harbour display appeared ever so close when the many colours fanned out and were reflected back in the many glass towers all around. Colours of red, green, blue and white filled the sky on that cool Summer evening and when the fireworks were finished, it was haunting to hear all the boats in the harbour sounding their horns, giving thanks for a magical Summer’s night.

The iced tea is beginning to show up as well, brought down to English Bay in a mason jar to sip while watching the sunset, packed in a tote with fruit and salad by Huguette for her solo picnics in the park and recently came with us on our favourite walking trail in the park (now open for the Summer, a cool, green space winding around the miniature train tracks) – it was Huguette’s tea that day and the watermelon coloured liquid looked beautiful in the sunlight, her large mason jar sitting on an old tree stump not far from the pond where we heard the first squeaks this year from the frogs we always startle on a trail we usually have to ourselves in the summer. This lone tree stump sits in a squared off area ( created by the laying down of four large logs) found just off the main trail, a hidden oasis where one can sit on a log and listen to the forest symphony, the sound of birds, the excited voices of the children riding on the miniature train and the steady clip-clop of horse drawn carriages on the main road beyond. The communion found here with good company, a cool, refreshing drink close by and the hush of the lush surroundings never fail to soothe my soul.

A young woman caught communing with the beautiful trees in Stanley Park.

I find myself writing of fireworks and ice tea because of a memory that came back to me recently, a memory filled with the scent of woodsmoke in the air, breakfast bacon sizzling on the stove and that heady forest scent that only camping out can bring. My family and I stayed in a cabin one memorable Summer vacation on Vancouver Island, B.C. at a magical campground called Oyster Bay. I’m sure this is where my love of the ocean and forest first began, there was something freeing about letting each day unfold and being able to wander about among the many trees – I remember we did some exploring as well and came across a flea-market of sorts on a roadside, I was thrilled when my parents bought me my first pair of flip-flops, they were dark green in colour and so grown-up, I was also able to pick up a precious paperback or two to add to an already blissful holiday. Years later on another Vancouver Island holiday, Terry and I found ourselves booking into the very modern “Oyster Bay Resort” and to my surprise, as we checked in, there on the wall was a black and white photograph of that long ago campground, I felt hologram-like as I stood there in the present with those long ago memories captured in that one shot tacked up on the wall. I love the touchstones of Summer, sometimes manifesting in a burst of exploding light, appearing in the coolness of an herbal iced tea or perhaps in a woodsmoke tinged memory, asking only, that we linger… 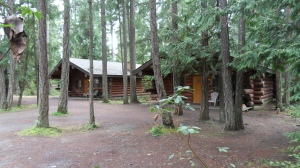 The cabins at the beautiful resort of Tigh-Na-Mara near Parksville on Vancouver Island, B.C. 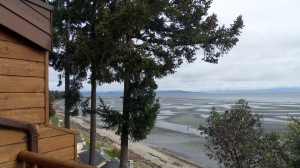 A stunning view of Rathtrevor Beach from the resort of Tigh-Na- Mara near Parksville on Vancouver Island, B.C.

We have been in Mexico for forty days now and it feels good. I think of Vancouver and it feels like I’ve been away for a long time. We have caught the odd movie that was made in Vancouver and the scenery takes your breath away, it’s something to look forward to seeing in one month or so.

On Wednesday, we spent most of the day with Terry’s friend Robert (a work friend from Vancouver), his wife Fabienne and their two children. We caught a bus here on Calle Brasil at the local bus station to take us out to Nuevo Vallarta to the resort where they are staying called “Samba” by Pueblo Bonita. It was a nice ride through Puerto Vallarta and out to Nuevo, it brought back memories of staying there at “Paradise Village”. We got off at Paradise Village Plaza and then had about an hours walk to the “Samba”!  We didn’t realize how expensive the local buses or taxis’s would be. After we met up with them, we hopped on another bus to head back to our hotel for water refills. We also wanted to show them where we are living. We then went on a city walk to the Rio Cuale to have a late lunch (at the charming and cool “La Fuente del Puente) and then onto another bus to catch the sunset at Mismaloya. Robert also wanted to see the jungle. We ended up on the Malecon at about 8 pm eating grilled corn – the Malecon was very busy with tourists and Mexicans celebrating the holiday season, We all had a good time and Fabienne even managed to do some evening flea market bargaining! 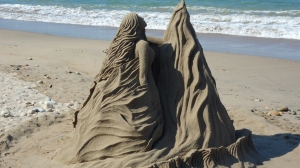 A Summer touchstone, a beautiful sand sculpture on the beach beside the Malecon in Puerto Vallarta, Mexico.

Leave a Reply, I'd Love to Hear From You Cancel reply

This site uses Akismet to reduce spam. Learn how your comment data is processed.