Posted on August 18, 2016 by anotetohuguette

“ Life is a series of collisions with the future; it is not the sum of what we have been, but what we yearn to be.” – Jose Ortega y Gasset

My morning tea is cooling down and I’m thankful for the fresh breeze that is moving through the open door. Someone nearby is blowing bubbles and as I write, one or two large circular ones just lazily sailed by, their delicate colours flashing in the sunlight. My eyes are drawn to the lone gull chick standing on what we call it’s dais, a square metal platform on top of the hotel roof where she or he hatched many weeks ago. It’s sibling has already leaped into the unknown and is now flying, this one seems to be taking it’s time. I don’t blame it, I understand the push and pull that sometimes rages on in our interior selves, especially if we are on a similar cusp in our lives. This gull chick is at a still point in it’s short life, caught between wanting to stay a chick and the need to follow instinct, to take those first steps into adulthood.

The backstory to this tender drama that is unfolding even as I write, is the inexplicable loss of it’s mother, she passed away on the roof top just a few days ago from a severe injury. We did not witness the injury and how it happened remains a mystery, all we know is that she tried very hard to recover. It seems that she may have tried to stay present until the last moment, to be present until that apex manifested. I did try to get help for the injured gull, I tracked down a wildlife rescue company and they were quite ready to help if the hotel was willing but sadly they were not, even after I spoke with a staff member. The mother gull’s body is still visible and the remaining chick is loathe to leave her, we often see it tugging on her still feathers to try and rouse her from her deep sleep. The good news is that the male gull has stepped up to the plate, he began to feed both chicks after their mother died and is a constant presence as the lone chick sorts out this flying business! What is really extraordinary is watching the community of gulls doing flyovers, each one flying low over the top of the roof to entice the chick and calling – it’s sibling and last years’ sibling have also flown over and often perch on adjacent buildings to lend their support. Apparently, it takes a gull village to raise up the land-locked chicks! Each time we come and go from our apartment we hope that the chick has fledged, catching that perfect updraft and joining his kin in the sky.

The summer season is at a still point as well, because of an early Spring and the summer-like temperatures we experienced in May, the natural rhythm of the seasons has been disrupted resulting in the fall of colourful leaves noticed in our back alley and on our forest walk yesterday. It is a stark reminder that time is always moving forward and like our lone gull chick we must embrace all that we yearn for and not look back at what we once were, to become the butterfly and leave behind our caterpillar selves.

Our favourite trail in Stanley Park, perfect for walking meditations!

A close up of the miniature train tracks and fencing on our favourite trail in Stanley Park, it stirs the imagination!

On Friday we tried our local “comida corrida”, Paula’s – for 27 pesos you get a bowl of soup, a jug of fruit water and a main meal. I had the breaded chicken and Terry had a beef stir-fry. It was very good and filling. Paula’s is highly recommended by other hotel guests; we can see the cocina from our balcony and it is very busy. People arrive by foot, car and taxi – they also do a very booming take-out business. I hope we go again, yum!

We are starting to think of traveling home to Vancouver, we’ve already started buying the small reminders that we’d like to bring home – T-shirts and the like. At home we have many items to help us remember our time spent in Vallarta. My theme this year is about collecting items that bring to mind the spirit of rebels, I bought a Che T-shirt and a handmade “rebel” doll from Chiapis.

Today will be a quiet day, we went on 2 very long walks yesterday – in the morning we walked to the Mega grocery store for some much needed shopping and in the afternoon, a malecon walk to our old neighbourhood (Old Town). It’s beautiful here on the balcony as I write down my thoughts, there is Mexican music in the air and soft warm breezes!

A favourite resting spot just off the Malecon, the colourful plaza in the heart of Puerto Vallarta, Mexico. 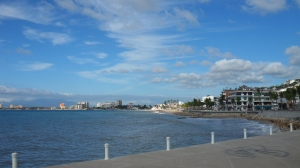 The stunning blue waters of Banderas Bay as seen from the Malecon in Puerto Vallarta, Mexico.

We couldn’t resist taking a shot of the beautiful inlaid designs of the newly built Malecon and the always cheerful balloon seller in Puerto Vallarta, Mexico.

Leave a Reply, I'd Love to Hear From You Cancel reply

This site uses Akismet to reduce spam. Learn how your comment data is processed.